Homer Electric Association My Cooperative Board of Directors Elections 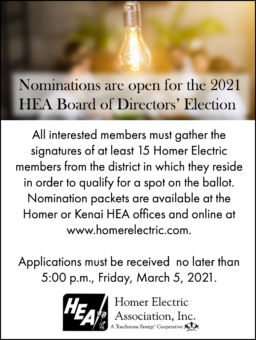 Homer Electric Association (HEA) is accepting nominations from members interested in running for a seat on the cooperative’s board of directors.

The cooperative’s board consists of nine directors, three from each of the three Kenai Peninsula service area districts.

HEA directors are elected by district, with members voting only for the director in their respective district.

Members interested in putting their name on the ballot must fill out a Candidacy Packet that requires the candidate to gather at least 15 signatures from current HEA members that live in the district where the candidate resides. The Candidacy Packet is available at HEA offices in Kenai and Homer and online at www.homerelectric.com.

The deadline to submit the Candidacy Packet is 5 PM on Friday, March 5, 2021. Completed packets can be submitted at either the Kenai or Homer HEA offices.

Ballots will be mailed to HEA members on April 5, 2021, and the results will be tabulated and announced at the Virtual Annual Meeting of the Members on May 6, 2021.

For more information, contact Bruce Shelley at 907.283.2324 or bshelley@homerelectric.com

HEA Board of Directors’ District Map