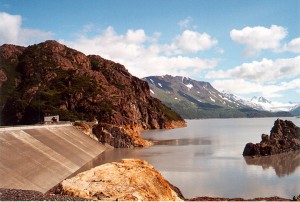 In the 1970s, a popular bumper sticker around Homer and the Kenai Peninsula proclaimed a simple message, “Build Bradley Lake Now.” The original proponents of the hydroelectric project recognized the significant potential that the glacier fed lake, located 27 miles from Homer, had for providing electricity to the residents of southcentral Alaska. Bradley Lake supporters worked for many years to convince the State of Alaska and the U.S. Army Corps of Engineers that building a hydroelectric project was a cost-effective venture that would provide decades of reliable and affordable power to Alaskans.

The dream turned into a reality in 1986 when construction on the $328 million hydroelectric plant was started. Five years later, in September 1991, the plant was energized and began transmitting electricity to residents from Homer north to Fairbanks.

Today, Bradley Lake is the largest of seven hydroelectric facilities in the state, with a capacity of 120 megawatts. This hydro power is a clean, affordable alternative to the fossil fuels that are used to generate the majority of electricity in Alaska.

A portion of Homer Electric’s power generation portfolio comes from our 12% share of the output from Bradley Lake Hydroelectric Plant.

The State of Alaska is the owner of the hydroelectric facility. Six electric utilities, including Homer Electric, participated in the funding and are each allocated a share of the power generated by Bradley Lake. Homer Electric Association’s share of Bradley Lake power is approximately 14 megawatts.

Homer Electric Association has a contract the State of Alaska to operate and maintain the Bradley Lake facility. Under the terms of this contract, Homer Electric employees are responsible for the overall operation of the state’s largest hydroelectric facility that serves over 70 percent of the state’s population.

The project includes a 610-foot long, 125-foot high concrete-faced and rock-filled gravity dam at Bradley Lake. A 3.5-mile power tunnel, with a diameter of 11 feet, transports water from the dam to the power house. The power house contains two generators, each capable of producing 60 megawatts.

The power generated at Bradley Lake is carried to customers via two parallel 115 kilovolt lines that extend 20 miles across Fox River valley to Bradley Junction where the lines connect with the Fritz Creek – Soldotna transmission line. Through interconnection with the existing transmission system, Bradley Lake power is moved through the Railbelt area and north to Fairbanks.

Hydroelectric power is the cheapest, cleanest, most flexible source of electricity available. The power generated at Bradley Lake averages about four cents per kilowatt hour, a significant savings over the cost of fossil fuel sources. This environmentally clean power source provides a renewable resource that can be used by future generations of Alaskans.